I would now like to turn my attention to one of the most important aspects of the movie, the significance of the moon, LV 223 and its relationship with LV 426 from Alien. Shaw and Holloway interpret the star map on their archaeological finds as an invitation from the engineers. Based on galactic screening, they seem to have identified a system that corresponds exactly to the configuration in the ancient pictographs. Holloway explains that the system has a sun and a planet orbiting it. The object that the engineer seems to be pointing towards in the map happens to be one of the moons of the planet, called LV 223.

Let us first observe one of the cave paintings. This one is from the Isle of Scotland, dating back to almost 35,000 years ago. 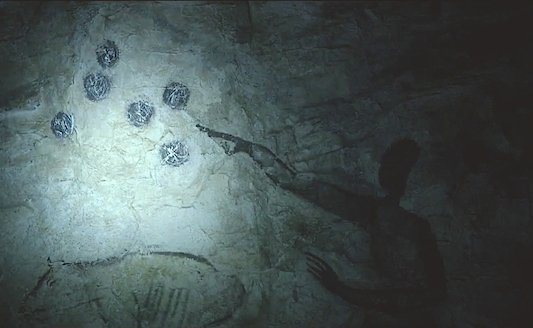 Cave Painting from Scotland – From geeksofdoom.com

As we can see, six objects form a system and the engineer is specifically pointing towards one of them. Now, based on the galactic map that we see in the briefing on Prometheus, the things that are clear are the presence of a sun, a ringed-giant planet, and a couple of moons. So, that explains four objects. What of the other two? I think one of them could be another natural satellite of the planet and perhaps, the other is a planetoid!

LV 223 provides us with the first clue in unlocking the connection between Prometheus and Alien. For instance, the main planet, of which LV 223 is one of the moons, is suspiciously similar to the planet encountered in Alien – a solitary ringed, Jovian type planet with a multiple minor objects orbiting it. Please remember once again, my attempt here is to link Alien with Prometheus. I am deliberately avoiding any references to Aliens and other films. Most importantly, there will be no connections to any of the novelizations and comic book adaptations. So, don’t expect names like, Acheron or Calpamos.

When Holloway describes the star map on board, he mentions that there is just one planet. Similarly, there is absolutely no mention about planets in Alien as well. In fact, in Alien, Lambert identifies the source of the signal being LV 426, a planetoid that is 1200 km in diameter. Over the years, people have referred to LV 426 as a natural satellite of the ringed planet it orbits. I am not so sure (I will come back to this theme a bit later). Planetoids are objects that orbit around their sun directly (Hence, they are not moons!). The term Minor planets has been used sometimes as well. The term planetoid is generally used for larger objects. But the most important thing to note here is that they are not planets. Asteroids are prominent members of the planetoid family.

Lets dig into the planetoid factor a bit. From a size standpoint (1200km), LV 426 is in the same league as Charon, Pluto’s natural satellite and roughly 35% the size of our moon. It is also a well known fact that such a larger object would be spherical, given sufficient gravitational force. This checks out as we also learned in Alien that the gravity on LV 426 was 0.86 times that of gravity on earth. In addition, Dallas asks Lambert to determine if LV 426 has any rotation. She says it is 2 hours. It is somewhat relative to the rotational period of some asteroids in the Asteroid belt of our Solar System. Things get juicier when we look at LV 426 from the asteroid belt perspective. We all know that the asteroid belt is located between Mars and Jupiter in our solar system. The belt formed from basic elements of planets called, planetesimals that later clumped into protoplanets (which, given ideal conditions, would have formed planets). But, the gravitational pull of Jupiter was so immense that it superseded the ability of these protoplanets to assemble together to form a planet. Technically, the pull imparted these protoplanets with a lot of orbital energy.

So, my theory is that the spherical planetoid LV 426 formed from protoplanets ripped apart by the strong gravitational pull of the ringed gas giant and shares a few characteristics with some illustrious members of our asteroid family.

Coming back to my LV 426 is not a moon argument, well, we saw that its rotation period is 2 hours. Since, in majority of the cases, synchronicity is expected for planetary moons (rotational period is equivalent to orbital period due to tidal locking with the planet – moon showing the same face to an observer on the planet), 2 hours seems like a tremendous stretch.

The star system observed in Prometheus and Alien reflect reality to a certain extent due to the fact that we have identified a large number of extra solar Jovian type solitary planetary systems orbiting sun like stars over the years. It is theorized that many such planets identified could have rocky moons, which could have less inhospitable environments and LV 223 is such an example. Just yesterday, NASA’s Kepler Space Lab announced that it has discovered a pair of planets orbiting a pair of suns –  sort of like a real life Tatooine!

Anyway, coming back to the star map, I was wondering if it would be possible to pinpoint LV 426 on it? I have indicated my choice on the following picture. Apart from taking a theoretical liberty of assigning the orbits for the moons of the planet, there was this intriguing scene from Prometheus that motivated my choice. When Holloway zoomed in on the 3D interactive map, we could see only five objects and the object that I had noted as LV 426 was marked differently. It looked to me like a rocky object (brown colored) and seemed like it could be related to LV 426 that we saw in Alien. Well, I might be dead wrong!

In conclusion, LV 426 is part of the same star map that the engineers had shown humans and it is a planetoid. But, there are several broad questions that still remain.

1. What’s the deal with asking us to visit an alien moon and not their home planet?

This is probably the most important question that can probably be resolved within the framework of Prometheus’s entire plot.

3. Who activated the so called, “distress signal”?

4. Whatever happened to the creature that burst out of the engineer’s chest?

Questions 2, 3, and 4 can be best explained in the context of Prometheus 2 plot and the notorious black goo, which I will discuss a bit later. But, for the moment, I would like to say something about the Derelict on LV 426. Some people have speculated that it had crashed on LV 426. I was personally not in favor of this idea. Ridley Scott himself has said that it did not crash and it was probably a forced landing. For proof, have a look at this clip, where he talks to Geoff Boucher from LA Times for the Nerdist Channel. He talks about it at 04:53 minute mark.

In my next post, I will analyze the happenings when the crew ventured into the hollow structure and found the engineer and the black goo cargo.

It will also include analysis of the attributes of one of the most ambiguous characters in the entire film – David!

Most X philes would be knowing that David, Gillian, Chris, and Frank visited WonderCon and spoke about the movie a lot! Some internet rumors about the plot of the movie were also kinda discussed! Many videos from their visit are still available in youtube! I will embed them here anyway by tomorrow! They also showed a trailer and it featured Billy Connolly prominently! He seems to be walking in snow with a large group of FBI agents, along with Scully and Mulder! He can be heard sayin, “It is is here”! One thing that is clear is that this one is gonna be a stand alone type monster movie, so it was interesting! But there is nothin more anyone can learn from the trailer! Someone recorded the trailer over at WonderCon and the uploads started showin up on youtube, but most are dead by now as the tube has taken down most of ’em! I have anyway posted the video over at dailymotion and embedding the same for your viewing pleasure! Will post in detail about my views later! For the time being, enjoy the trailer!

As u folks would know the second X files movie is currently filming and is coming out this June! Chris Carter had mentioned earlier that this movie will have nothin to do with the mythology series in the show and instead will be some kinda stand alone type monster movie! But the plot of the film is under wraps and no one knows anythin more than the fact that the running title for the movie is Done One! A few days ago some pictures surfaced on the internets showing Mulder and Scully from the new film! I am posting the pictures rite here and hope I am not gonna get a request to take the pics down! So here they are! Click on the thumbnails for high resolution pictures.

Follow Reflections on the Strange and the Not so Strange on WordPress.com